Montana Heights is located in Brgy. Bucal in the city of Calamba in Laguna. Calamba is a first class city within the province of Laguna. It has a population of less than half a million. Hence, it is not as crowded as in Metro Manila, which also explains why lots of new residential developments are focused on these areas. This is also the reason why New Apec Homes chose Calamba as the site of their new residential development. They aim to address the needs of property buyers who are seeking out homes and properties that are located just outside of Metro Manila.

Historically, Calamba is best known as the hometown of Philippine national hero, Jose Rizal. Since it was developed into a city, a huge percentage of the land has been dedicated to urban expansion and growth developments. You can definitely see a huge improvement in Calamba’s cityscape over the years and there are many new opportunities for the locals to exploit. However, the upland conservation and forest buffer zones are still well protected to ensure that the locals can enjoy the beauty of the province’s natural landscapes through the next generation.

Speaking of opportunities, there are several business and commercial establishments that are operating in Calamba, which also helps to keep its economy alive. Banking is one of the top services that are available to the city. It is noted as the ‘Richest City in Calabarzon’ because of the registered total income. There are currently 83 banking firms that are operating in the city.

In addition to a healthy banking industry, there is also a growing industries and manufacturing scene. The following industrial parks can be found within the city zone, which also provides many employment opportunities for the locals of Calamba: Allegis IT Park, Filinvest Technology Park, Calamba Industrial Estate, Calamba Industrial Parks 1 and 2, and SMPIC Special Economic Zone, to name a few.  The city is also recognized as one of the “Next Wave Cities” that are recognized as one of the best destinations for call center firms to operate in.

Even though Montana Heights is located outside of Metro Manila, it is still preferred by home buyers because of its accessibility to and from the metro. The area is linked to many of the major roads and highways that allow you to travel to Metro Manila with ease. Some of the major roads and highways that you can use to access Calamba in Laguna are the Chipeco Avenue, Pan-Philippine Highway, and the South Luzon Expressway.

If you need to unwind after a hectic day at work or school, there are plenty of tourism spots and places of interest in Calamba. You do not need to travel out of town in order to enjoy these leisure facilities and spots. Some of these major attractions include the Rizal Shrine, St. John the Baptist Church, Calamba Island, Republ1c Park, and Hot Spring Resorts. Speaking of resorts, the city of Calamba is best known for its resorts and you will find many of them within the city including 88 Hotspring Resort, Southwinds Resort, and Riverview Resort. 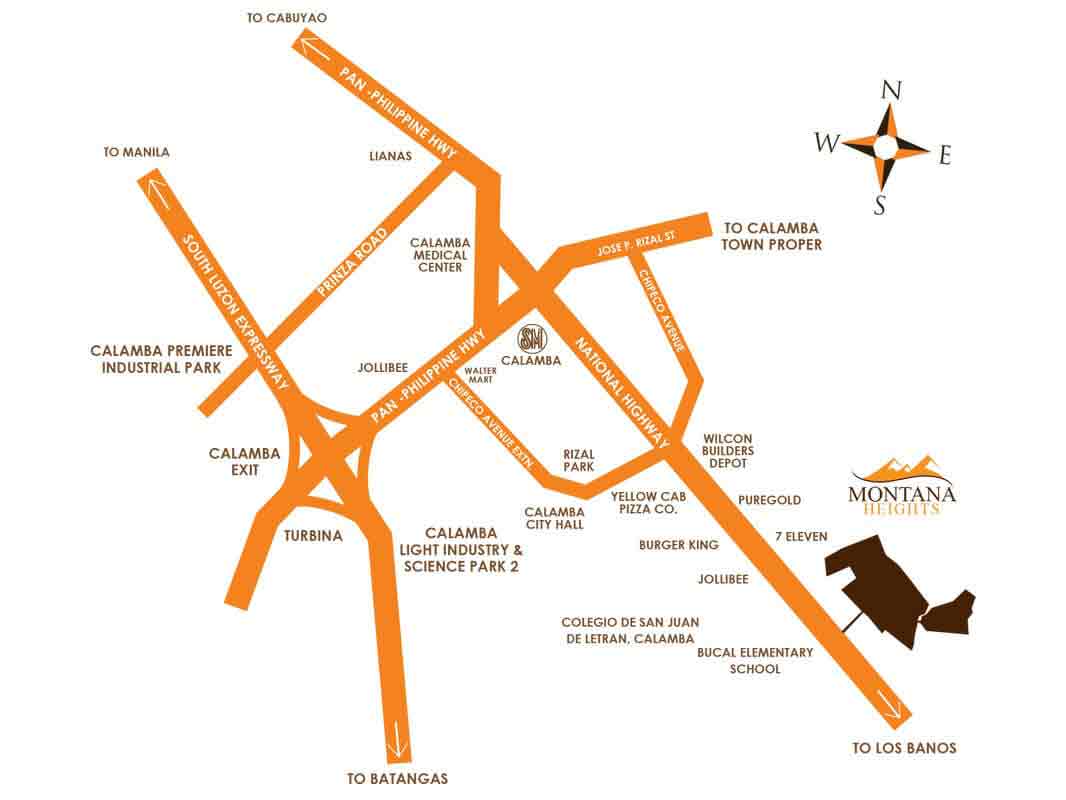